Alan Alda once had the distinction of being nominated for an Oscar, a Tony, and an EMMY -- as well as publishing a bestselling book -- all in 2005.

He has earned international recognition as an actor, writer and director. In addition to "The Aviator," films include "Crimes and Misdemeanors," "Everyone Says I Love You," "Flirting With Disaster," "Manhattan Murder Mystery," "And The Band Played On," "Same Time, Next Year" and "California Suite," as well as "The Seduction of Joe Tynan," which he wrote, and also "The Four Seasons," "Sweet Liberty," "A New Life," and "Betsy's Wedding," all of which he wrote and directed.

On Broadway, he has appeared as the physicist Richard Feynman in the play "QED." He starred in the first American production of the international hit play "ART." In addition to his Tony nomination for "Glengarry," he was also nominated for the Tony Award for his performances in Neil Simon's "Jake's Women" and the musical "The Apple Tree." Other appearances on Broadway include "The Owl and the Pussycat", "Purlie Victorious" and "Fair Game for Lovers" for which he received a Theatre World Award. 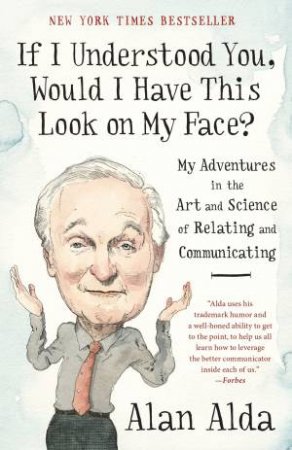 If I Understood You, Would I Have This Look On My Face?
Alan Alda
$29.99
RRP refers to the Recommended Retail Price as set out by the original publisher at time of release.
The RRP set by overseas publishers may vary to those set by local publishers due to exchange rates and shipping costs.
Due to our competitive pricing, we may have not sold all products at their original RRP.