Alyx Harvey lives in a stone Victorian house in Ontario, Canada with a few resident ghosts who are allowed to stay as long as they behave. She loves medieval dresses, used to be able to recite all of The Lady of Shalott by Tennyson, and has been accused, more than once, of being born in the wrong century. She believes this to be mostly true except for the fact that she really likes running water, women's rights, and ice cream.

Jane Eyre by Charlotte Bronte was her favorite book growing up and Pride and Prejudice by Jane Austen is her all time favorite novel. Elizabeth Bennet is her hero because she's smart and sassy, and Mr. Darcy, well, what more do you need than the mention of his name to understand why a smile spreads across her face at the thought of him. Aside from the ghosts, she also lives with three dogs, one of whom is named Bronte, and her husband.

The Bronte sisters, Jane Austen, as well the Romantic Poets, the Pre-Raphaelites, mythology, and ancient history inspired her to become a writer. The idea for The Drake Chronicles popped into her head when she was thinking of a way to retell Snow White. She wanted it to be fun, slightly snarky and not take itself too seriously; she also wanted to play with vampires (they're another one of her intrigues) and indulge in a little historical fiction, some corsets, some magic and some girls who kick serious butt. 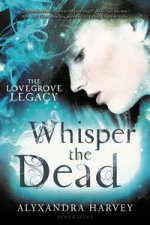 My Love Lies Bleeding
by Alyxandra Harvey
14.99
14.99
_% Off
RRP refers to the Recommended Retail Price as set out by the original publisher at time of release.
The RRP set by overseas publishers may vary to those set by local publishers due to exchange rates and shipping costs.
Due to our competitive pricing, we may have not sold all products at their original RRP.