Brian Patrick Herbert is a best selling American author who lives in Washington state. He is the elder son of famed science fiction author Frank Herbert.

Brian and his wife, Jan Herbert, have been happily married for forty years (as of 2007). They have three daughters, Julie, Kim, and Margaux Beverly. Brian also has an elder half-sister, Penny; their younger brother, gay activist Bruce Calvin Herbert, died of AIDS in 1993.

Brian Herbert's novels include Sidney's Comet, Prisoners of Arionn, Man of Two Worlds (written with his father), and Sudanna Sudanna. Brian has written a biography of his father: Dreamer of Dune: The Biography of Frank Herbert. The younger Herbert has edited The Songs of Muad'dib and the Notebooks of Frank Herbert's Dune. Brian has also created a concordance for the Dune universe based on his father's notes, though, according to the younger Herbert, there are no immediate plans to publish it. 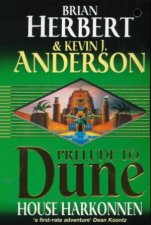 House Atreides
by Brian Herbert & Kevin J Anderson
22.99
22.99
_% Off
RRP refers to the Recommended Retail Price as set out by the original publisher at time of release.
The RRP set by overseas publishers may vary to those set by local publishers due to exchange rates and shipping costs.
Due to our competitive pricing, we may have not sold all products at their original RRP.