The Slaves of Socorro

4. The Slaves of Socorro

When the Heron brotherband become the Skandian duty ship to the Kingdom of Araluen, they're excited at the challenges ahead. Hal, Stig, Thorn and the Herons eagerly set off for the trip u with an unexpected new crew member aboard. But an enemy from their past returns, causing the Herons to be thrown into a dangerous new quest to free captured Araluans from the slave market in Socorro. Even with the help of an Araluan Ranger, the task may be too much. 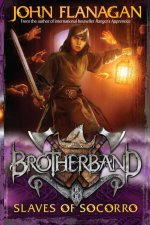 Slaves of Socorro
John Flanagan
RRP $13.99
$13.99
RRP refers to the Recommended Retail Price as set out by the original publisher at time of release.
The RRP set by overseas publishers may vary to those set by local publishers due to exchange rates and shipping costs.
Due to our competitive pricing, we may have not sold all products at their original RRP.