When we last saw George and Harold, they were about to take their pet pterodactyl Crackers back to the Cretaceous period. But things didn't work out quite as they had hoped. They've entered an absurd alternative reality where teachers are nice, kids are allowed to read banned books, and the cafeteria food doesn't smell like dirty diapers. Even worse, they've discovered alternate versions of themselves - Evil George and Evil Harold - who plan to unleash some preposterous plans on Piqua, Ohio. Now it's up to George and Harold to defeat the evil twins and THEIR superhero, Captain Blunderpants! 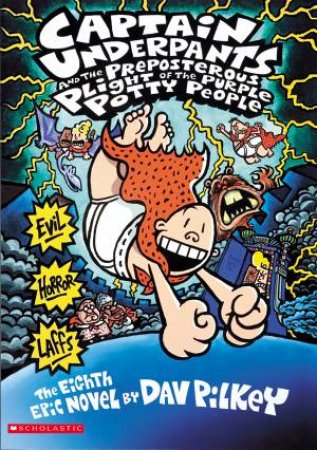 The Preposterous Plight Of The Purple Potty People
Dav Pilkey
$12.99
RRP refers to the Recommended Retail Price as set out by the original publisher at time of release.
The RRP set by overseas publishers may vary to those set by local publishers due to exchange rates and shipping costs.
Due to our competitive pricing, we may have not sold all products at their original RRP.