Way, way back in the early sixties, in my penultimate year of schooling I had my first story published in The Albertian, the school's annual magazine. I seemed to grow a couple of inches taller overnight and expected to be recognised wherever I went. It didn't happen. Even so, I wanted to be a writer when I left school. That didn't happen either. There was no demand then for authors who still didn't really need to shave and who had nothing to write about anyway I discovered advertising and it discovered me. The talent I had that saw me rejected as a novelist and, incidentally, as a journalist, seemed tailor made for a high-flying career as a copywriter. People in the industry liked my little jokes and wordplays and asked me to attach them to spreadable butters, soap powders, cooking foil and automobiles. Early successes saw me pack up my bags and take my pen to England where I joined J Walter Thompson. The second TV commercial I wrote for them won one of Britain's top awards. I moved to Australia and more successes followed. I forgot all about writing novels for the next twenty-five years until Bryce Courtenay wrote The Power of One.

Hell, there was nothing special about Bryce. He was just an advertising man like me and, worse, older. But he did it. He wrote a bestseller and broke the golden handcuffs that kept him chained to advertising. Jealousy is a powerful motivator. There's nothing like jealousy to snap a person out of their complacency. As it happened an American company was very keen to buy the advertising agency my two partners and I owned. They wanted to give us a lot of money and, at the conclusion of a three-year service contract, the opportunity to escape. 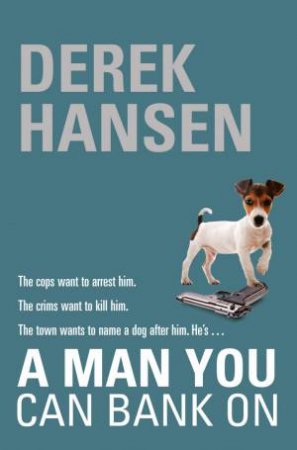 A Man You Can Bank On
Derek Hansen
$29.99
RRP refers to the Recommended Retail Price as set out by the original publisher at time of release.
The RRP set by overseas publishers may vary to those set by local publishers due to exchange rates and shipping costs.
Due to our competitive pricing, we may have not sold all products at their original RRP.