Forman began her career writing for Seventeen Magazine in which most of her articles focused on young people and social concerns. Later she became a freelance journalist for publications like Details Magazine, Jane Magazine, Glamour Magazine, The Nation, Elle Magazine, and Cosmopolitan Magazine.

From her journeys around the world, Gayle garnered a wealth of experiences and information which later served as a basis for her first book- You Can't Get There From Here: A Year On The Fringes Of A Shrinking World. Her most recent novel If I Stay is about a 17 year old girl who has been involved in a tragic car accident.

Gayle resides in Brooklyn, New York with her husband, daughter, and adopted daughter. 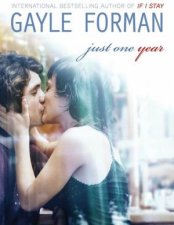 Where She Went
by Gayle Forman
19.99
19.99
_% Off
RRP refers to the Recommended Retail Price as set out by the original publisher at time of release.
The RRP set by overseas publishers may vary to those set by local publishers due to exchange rates and shipping costs.
Due to our competitive pricing, we may have not sold all products at their original RRP.