Jane Hissey is best known for her series of children's books Old Bear and Friends, which became the basis for a BAFTA award winning television series Old Bear Stories.

According to Hissey's Old Bear Diary, Old Bear was given to her by her grandmother when she was a baby. During her childhood he was a main focus of her games and then, thirty-two years later, he became the inspiration for her first illlustrated book. Later her childhood bear was joined by other soft toy characters, which she draws on nearly an every day basis.

Jane Hissey is a graduate of Brighton College of Art and was a teacher until the birth of her first child. She is now a full-time author and illustrator and lives in East Sussex with her husband and three children. 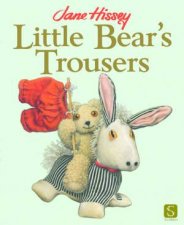 Little Bear's Trousers
by Jane Hissey
17.99
17.99
_% Off
RRP refers to the Recommended Retail Price as set out by the original publisher at time of release.
The RRP set by overseas publishers may vary to those set by local publishers due to exchange rates and shipping costs.
Due to our competitive pricing, we may have not sold all products at their original RRP.