Joanna Savill describes herself as someone who has eaten and cooked herself around the world! An international TV reporter/producer in her day job (with SBS TV's prestigious 'Dateline' program), Joanna originally trained as an interpreter, living and working in Italy, France, Germany and Belgium. Almost 7 years ago now, she and friend and colleague Maeve O'Meara created the best-selling SBS Eating Guides to Sydney and Melbourne. They then went on to make the TV series 'Food Lover's Guide to Australia'.

Joanna still works as a freelance translator and writer - a biography of Christian Dior translated by her from the original French was published in New York two years ago. She has also written a history of Italian women in Australia, commissioned by the National Italian-Australian Women's Association. She has been a guest speaker at community, educational and government functions. 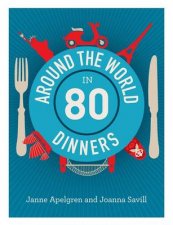 Around The World In 80 Dinners
by Jamme Apelgren & Joanna Savill
45.00
45.00
_% Off
RRP refers to the Recommended Retail Price as set out by the original publisher at time of release.
The RRP set by overseas publishers may vary to those set by local publishers due to exchange rates and shipping costs.
Due to our competitive pricing, we may have not sold all products at their original RRP.