Joanna Trollope was born in Cotswold in December 1943. Joanna grew up in a small family, she was the eldest of the three. She went to school in Surrey but only really started to enjoy education when she went to university. She won a scholarshop to Oxford University and joined the Foreign Office and then moved on to become a teacher. She began writing to fill in time after her children went to bed. It was in 1980 that Joanna became a full time author and has now been writing for over thirty years. Joanna Trollope has been married twice and now lives on her own in London. 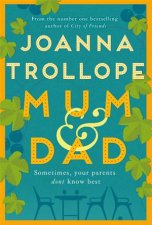 City Of Friends
by Joanna Trollope
19.99
19.99
_% Off
RRP refers to the Recommended Retail Price as set out by the original publisher at time of release.
The RRP set by overseas publishers may vary to those set by local publishers due to exchange rates and shipping costs.
Due to our competitive pricing, we may have not sold all products at their original RRP.