That man's warped and twisted like thread gone awry on the loom. The curse got him with a vengeance...

Caitrin, daughter of Berach, flees her home in Market Cross, running from her grief and mistreatment at the hands of her kinsfolk. Bruised and alone she arrives at Whistling Tor - a formidable fortification presided over by the local chieftain, Anluan. The villagers scorn and curse him for being a weak and unsupportive leader, unresponsive to their pleas for him to rid the surrounding forest of the ghostly and eerie manifestations that have plagued it for generations.

But desperate for work and shelter, Caitrin ignores their warnings, thinking them nothing more than fancifully tales and seeks refuge at the Tor. Here she encounters giant hounds, malevolent whispering in the night and the rare and precious herb, Heart's Blood; not to mention the moody and cursed Anluan.

As Caitrin slowly begins to regain control of her life, she discovers that not everything is as it seems in this mysterious place. What does Anluan's skewed features and anger hide? Who are the men and women of the Host? What might the ancient manuscripts and family documents in the library reveal? And why does Caitrin get the distinct impression that there is a dark and powerful force on the hill that doesn't want her to find the truth? 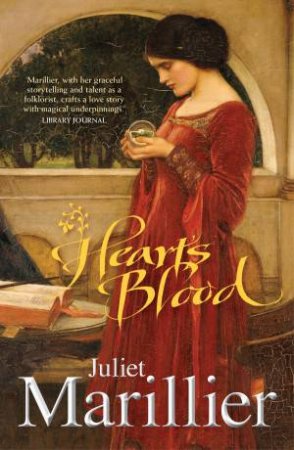 Heart's Blood
Juliet Marillier
$24.99
RRP refers to the Recommended Retail Price as set out by the original publisher at time of release.
The RRP set by overseas publishers may vary to those set by local publishers due to exchange rates and shipping costs.
Due to our competitive pricing, we may have not sold all products at their original RRP.