Karen Miller is an Australian writer.

Miller was born in Vancouver, Canada and moved to Australia at the age of two. After graduating from the Sydney University of Technology she moved to England for three years before moving back to Australia. Along with being a novelist she has written and directed plays for her local theatre group.

In 2005 Miller's first novel was released entitled The Innocent Mage. This was the first novel in the Kingmaker, Kingbreaker series and was followed shortly after by Innocence Lost. The Innocent Mage was widely acclaimed on it release in Australia and was a finalist in the 2005 Aurealis Awards fantasy division. Since then she has written several other novels, Empress of Mijak and The Riven Kingdom were honoured by the James Tiptree, Jr. Awards and has written two novels for Fandemonium's Stargate SG-1 series. 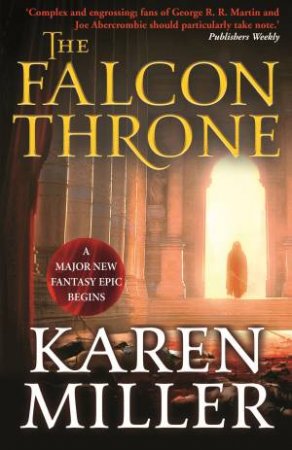 The Falcon Throne
Karen Miller
$22.99
RRP refers to the Recommended Retail Price as set out by the original publisher at time of release.
The RRP set by overseas publishers may vary to those set by local publishers due to exchange rates and shipping costs.
Due to our competitive pricing, we may have not sold all products at their original RRP.