Kieran Scott (born March 11, 1974), better known by her pen name Kate Brian, is an American author, best known for her work in the chick lit, young-adult genre. Among her most well-known books are The Princess and the Pauper, Megan Meade's Guide to the McGowan Boys, The Virginity Club, Sweet 16, Fake Boyfriend, and the prolific Private series. 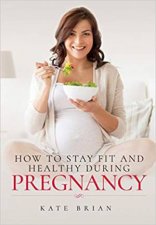 How To Stay Fit And Healthy During Pregnancy
by Kate Brian
44.99
44.99
_% Off
RRP refers to the Recommended Retail Price as set out by the original publisher at time of release.
The RRP set by overseas publishers may vary to those set by local publishers due to exchange rates and shipping costs.
Due to our competitive pricing, we may have not sold all products at their original RRP.