Kate was the recipient of 2011 and 2012 Arts Tasmania Assistance to Individuals grants, which means she can now spend more time doing what she loves. 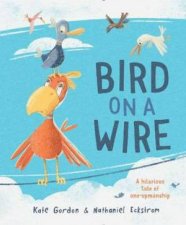 Thyla
by Kate Gordon
17.99
17.99
_% Off
RRP refers to the Recommended Retail Price as set out by the original publisher at time of release.
The RRP set by overseas publishers may vary to those set by local publishers due to exchange rates and shipping costs.
Due to our competitive pricing, we may have not sold all products at their original RRP.