Life has never been so insane for Private Investigator Nikki James: a teenager is missing; a madman is kidnapping the wealthy; she's got a vampire to contend with; and her partner and best friend, Jake, is in the hospital dying. And just when it seems like nothing else could possibly go wrong for her, Michael Kelly returns.

The last thing Michael needs is a confrontation with Nikki - especially when his control over his bloodlust is still so tenuous. But when a kidnapper steps up his agenda to murder, they are suddenly forced into a partnership. Soon Michael discovers the biggest danger may not be from his need to 'taste' Nikki, but from his desire to make her a permanent part of his life - a life that is sure to get her killed.

Nikki is determined to make Michael see that life apart is worse than death. But before she can make him see the light, a spectre from Michael's past rises that could destroy any hope she has of a future with him. 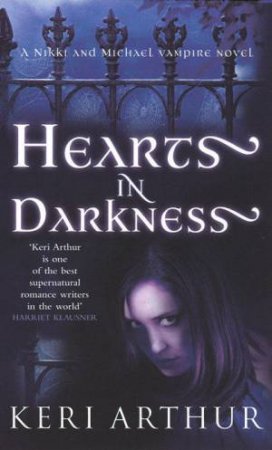 Hearts in Darkness
Keri Arthur
$21.99
RRP refers to the Recommended Retail Price as set out by the original publisher at time of release.
The RRP set by overseas publishers may vary to those set by local publishers due to exchange rates and shipping costs.
Due to our competitive pricing, we may have not sold all products at their original RRP.