Kylie Kwong (born 1969 in Australia), is a prominent Australian television chef, author, television presenter and restaurateur. Kylie Kwong, a fourth generation Chinese Australian, learned the art and fundamentals of Cantonese cooking by her Mother's side. She undertook much of her apprenticeship at Neil Perry's Rockpool and Wokpool and then at Restaurant Manfredi.
In 2003 the book Kylie Kwong: Heart and Soul was released as well as her first TV series on ABC. Her cooking style has also evolved from living in Australia, where there is access to some of the world's finest produce, including seafood from pristine waters, a bountiful range of Asian fruits, vegetables and herbs, free-range poultry and organically raised beef. She firmly believes that fresh is best, but she also believes that our food choices should be ethical, sustainable and supportive of both the natural and human environment. 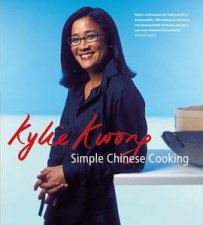 Simple Chinese Cooking
by Kylie Kwong
49.99
49.99
_% Off
RRP refers to the Recommended Retail Price as set out by the original publisher at time of release.
The RRP set by overseas publishers may vary to those set by local publishers due to exchange rates and shipping costs.
Due to our competitive pricing, we may have not sold all products at their original RRP.