Lauren was born March 28, 1977, in Scranton, Pennsylvania. At Parkland High School, Lauren participated in all sorts of projects, activities, and organisations for the sole purpose of padding her college application, although she did genuinely enjoy playing varsity tennis.

Once matriculated at Cornell University, she focused her energy on securing a steady stream of fake IDs and dating boys from the right fraternities. After graduating in 1999 with a BA in English, Lauren moved home for the summer to save money and then traveled all over Europe, Israel, Egypt, Jordan, Thailand, India, Nepal, and Hong Kong. She carried a single small backpack and stayed in questionable places, further enriching her authentic cultural experiences by eating only Nutella and drinking Coca-Cola Light.

Lauren's first job after returning to the U.S. and moving to Manhattan was the Assistant to the Editor-in-Chief of Vogue, Anna Wintour. Lauren became proficient in the language of stilettos and Starbucks before moving to Departures magazine, where she wrote 100-word reviews by day and took writing classes at night. The Devil Wears Prada, begun at the Writer's Voice, was published in April 2003, and spent six months on The New York Times Bestseller List. It was sold in thirty-one foreign countries and made into a major motion picture by Fox 2000 starring Meryl Streep and Anne Hathaway. Lauren has a half-second cameo in the film that even she is hard-pressed to locate after several viewings. 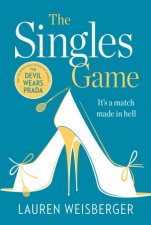 Revenge Wears Prada: The Devil Returns
by Lauren Weisberger
22.99
22.99
_% Off
RRP refers to the Recommended Retail Price as set out by the original publisher at time of release.
The RRP set by overseas publishers may vary to those set by local publishers due to exchange rates and shipping costs.
Due to our competitive pricing, we may have not sold all products at their original RRP.