Marion Chesney is known primarily for the more than 100 historical romance novels she has published under her own name and under several pseudonyms: Helen Crampton, Ann Fairfax, Jennie Tremaine, and Charlotte Ward. But M.C. Beaton is the pseudonym she reserves for her mystery novels.

M.C.Beaton was born in Glasgow, Scotland, in 1936 and started her first job as a bookseller in charge of the fiction department in John Smith & Sons Ltd. While bookselling, by chance, she got an offer from the Scottish Daily Mail to review variety shows and quickly rose to be their theatre critic. She left Smith's to join Scottish Field magazine as a secretary in the advertising department, but quickly got the job of fashion editor instead. She then moved to the Scottish Daily Express where she reported mostly on crime. This was followed by a move to Fleet Street to the Daily Express where she became chief woman reporter.Shen continued to work as a journalist

for many years, even after emigrating to the United States. 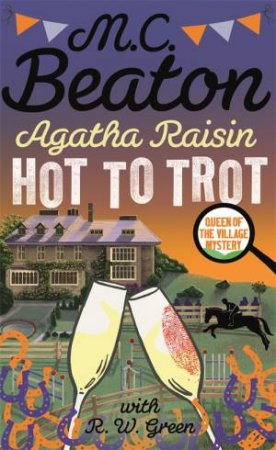 Hardcover
Agatha Raisin: Hot To Trot
M. C. Beaton
$45.00
RRP refers to the Recommended Retail Price as set out by the original publisher at time of release.
The RRP set by overseas publishers may vary to those set by local publishers due to exchange rates and shipping costs.
Due to our competitive pricing, we may have not sold all products at their original RRP.