Meg Cabot (born Meggin Patricia Cabot on February 1, 1967 in Bloomington, Indiana, United States) is an American chick-lit author of romantic comedies for teens and adults. She has also written under the name Meggin Cabot, as well as the pseudonyms Patricia Cabot and Jenny Carroll. She has written and published over fifty books, and is best known for The Princess Diaries, later made by Walt Disney Pictures into two feature films of the same name. Cabot has more than fifteen million copies of her books in print worldwide. Her website averages about 80,000 unique visitors a month. 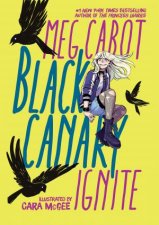 To The Nines
by Meg Cabot
14.95
14.95
_% Off
RRP refers to the Recommended Retail Price as set out by the original publisher at time of release.
The RRP set by overseas publishers may vary to those set by local publishers due to exchange rates and shipping costs.
Due to our competitive pricing, we may have not sold all products at their original RRP.