Michelle Moran was born in the San Fernando Valley, CA. She took an interest in writing from an early age, purchasing Writer's Market and submitting her stories and novellas to publishers from the time she was twelve. When she was accepted into Pomona College she took as many classes as possible in British Literature, particularly Milton, Chaucer, and the Bard. Not surprisingly, she majored in English while she was there. Following a summer in Israel where she worked as a volunteer archaeologist, she earned an MA from the Claremont Graduate University.

Michelle has travelled around the world, from Zimbabwe to India, and her experiences at archaeological sites were what inspired her to write historical fiction. She is the international bestselling author of Nefertiti, The Heretic Queen, and Cleopatra's Daughter. Her fourth novel, Madame Tussaud, was released on February 15, 2011. 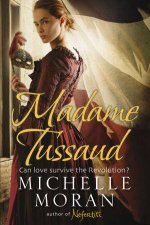 Cleopatra's Daughter
by Michelle Moran
24.99
24.99
_% Off
RRP refers to the Recommended Retail Price as set out by the original publisher at time of release.
The RRP set by overseas publishers may vary to those set by local publishers due to exchange rates and shipping costs.
Due to our competitive pricing, we may have not sold all products at their original RRP.