On September 30, 2010, it was announced that Polizzi would be writing a book entitled 'A Shore Thing', describing her search for love on the boardwalk. On January 4, 2011, A Shore Thing was released and was promoted on The View, The Ellen DeGeneres Show, Jimmy Kimmel Live and The Late Show with David Letterman. 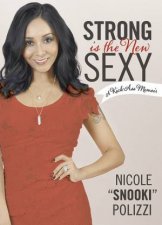 Strong Is the New Sexy
by Nicole Polizzi
30.99
30.99
_% Off
RRP refers to the Recommended Retail Price as set out by the original publisher at time of release.
The RRP set by overseas publishers may vary to those set by local publishers due to exchange rates and shipping costs.
Due to our competitive pricing, we may have not sold all products at their original RRP.