Nikki Gemmell (born 1966) is an Australian author, best known for anonymously writing the best-selling erotic novel The Bride Stripped Bare. Gemmell was born in Wollongong, New South Wales. She has worked as a radio journalist for ABC Radio in Sydney, New South Wales, Darwin, Northern Territory, Alice Springs, Northern Territory, at Triple J, the ABC's youth network and as a producer for the BBC World Service.
She wrote three novels: Shiver, Cleave and Love Song, before the 2003 publication of The Bride Stripped Bare, which became an international bestseller. Although published anonymously, Gemmell was soon identified as the author. Gemmell's searching narratives have led the French to compare her to hail her as a "female Jack Kerouac"; critics in the United States have hailed her as one of the few truly original literary voices to emerge in a long time. The influential Francophone literary journal Lire included her in a list of the 50 international writers it believes will have "a significant influence on the literature of the 21st century". The writers - selected by a group of editors - were chosen for their "originality of subject", "individual voice" and "unmistakeable style". 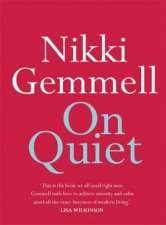 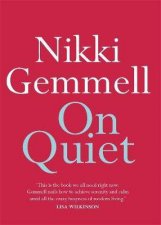 On Quiet
by Nikki Gemmell
14.99
14.99
_% Off
RRP refers to the Recommended Retail Price as set out by the original publisher at time of release.
The RRP set by overseas publishers may vary to those set by local publishers due to exchange rates and shipping costs.
Due to our competitive pricing, we may have not sold all products at their original RRP.