Born in Ohio, USA, on May 31 1898, Norman Vincent Peale grew up helping to support his family by delivering newspapers, working in a grocery store, and selling pots and pans door to door, but later was to become one of the most influential clergymen in the United States during the 20th-century.

He was educated at Ohio Wesleyan University and Boston University. His simple, optimistic, and dynamic sermons brought increasing numbers of parishioners and increasing fame to Peale. For 54 years Peale's weekly radio program, "The Art of Living," was broadcast on NBC. His sermons were mailed to 750,000 people a month. His life was subject of a 1964 movie entitled One Man's Way.

In 1945, Peale and his wife started Guideposts magazine; its circulation now tops 4.5 million, the largest of any religious magazine. Peale also published several best-selling books, including The Art of Living (1937), Confident Living (1948), The Power of Positive Thinking (1952), and This Incredible Century (1991). His most popular book, The Power of Positive Thinking, has sold more than 20 million copies in 41 languages. 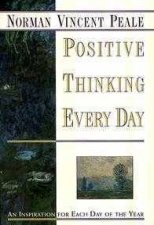 Positive Thinking Every Day
by Norman Vincent Peale
16.99
16.99
_% Off
RRP refers to the Recommended Retail Price as set out by the original publisher at time of release.
The RRP set by overseas publishers may vary to those set by local publishers due to exchange rates and shipping costs.
Due to our competitive pricing, we may have not sold all products at their original RRP.