Paullina Simons was born in Leningrad, USSR in 1963. At the age of ten her family immigrated to the United States. Growing up in Russia Paullina dreamt of someday becoming a writer. Her dream was put on hold as she learned English and overcame the shock of a new culture.

After graduating from university and after various jobs including working as a financial journalist and as a translator Paullina wrote her first novel Tully. Through word of mouth that book was welcomed by readers all over the world.

She has since written Red Leaves, Eleven Hours, The Bronze Horseman, The Bridge to Holy Cross, (also known as Tatiana and Alexander.) The Summer Garden and The Girl in Times Square. Many of Paullina's novels have reached international bestseller lists in countries including Australia and New Zealand. 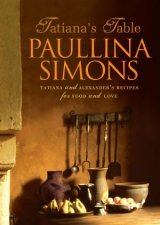 Tully
by Paullina Simons
19.99
19.99
_% Off
RRP refers to the Recommended Retail Price as set out by the original publisher at time of release.
The RRP set by overseas publishers may vary to those set by local publishers due to exchange rates and shipping costs.
Due to our competitive pricing, we may have not sold all products at their original RRP.