Sir Richard Charles Nicholas Branson (born 18 July 1950) is an English business magnate, best known for his Virgin brand of over 360 companies. Branson's first successful business venture was at age 16, when he published a magazine called Student. He then set up an audio record mail-order business in 1970. In 1972, he opened a chain of record stores, Virgin Records, later known as Virgin Megastores and rebranded as Zavvi in late 2007. With his flamboyant and competitive style, Branson's Virgin brand grew rapidly during the 1980s - as he set up Virgin Atlantic Airways and expanded the Virgin Records music label. Richard Branson is the 245th richest person according to Forbes' 2008 list of billionaires as he has an estimated net worth of approximately $2.8 billion USD. 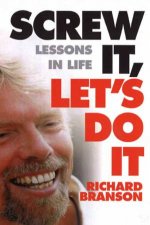 Screw It, Let's Do It: Lessons In Life
by Richard Branson
22.99
22.99
_% Off
RRP refers to the Recommended Retail Price as set out by the original publisher at time of release.
The RRP set by overseas publishers may vary to those set by local publishers due to exchange rates and shipping costs.
Due to our competitive pricing, we may have not sold all products at their original RRP.