Landover was a genuine magic kingdom, complete with fairy folk and wizardry, just as the advertisement had promised. But after he purchased it for a million dollars, Ben Holiday discovered that there were a few details the ad had failed to mention … Such as the fact that the kingdom is falling into ruin. The barons refuse to recognise a king and taxes haven’t been collected for years. The dragon, Strabo, is laying waste to the countryside, while the evil witch, Nightshade, is plotting to destroy no less than everything. And if that weren’t enough for a prospective king to deal with, Ben soon learns that the Iron Mark, terrible lord of the demons, has challenged all pretenders to the throne of Landover to a duel to the death—a duel no mere mortal can hope to win. But Ben Holiday has one human trait that even magic can’t overcome. Ben Holiday is stubborn. 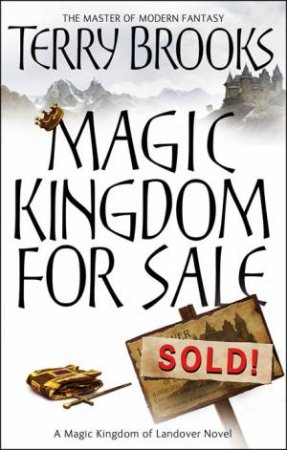 Magic Kingdom for Sale/Sold
Terry Brooks
$24.99
RRP refers to the Recommended Retail Price as set out by the original publisher at time of release.
The RRP set by overseas publishers may vary to those set by local publishers due to exchange rates and shipping costs.
Due to our competitive pricing, we may have not sold all products at their original RRP.