Thalia grew up on a farm on the outskirts of Melbourne, Australia. She has a few series like: Go Girl, Girlfriend Fiction, the nonfiction series It's True and more recently, Girl Vs the World. She has also released a stand alone novel, Silhouette. These days Thalia lives in north-eastern Victoria with her husband and two children, and their black cat named Bindi. 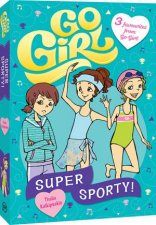 Go Girl! Friends Forever 3-In-1
by Meredith Badger, Thalia Kalkipsakis & Rowan McAuley
17.99
17.99
_% Off
RRP refers to the Recommended Retail Price as set out by the original publisher at time of release.
The RRP set by overseas publishers may vary to those set by local publishers due to exchange rates and shipping costs.
Due to our competitive pricing, we may have not sold all products at their original RRP.