To celebrate Mouseford Academys 600th anniversary, the headmaster and teachers decide to stage a performance of William Squeakspeares famouse play 'Mouseo and Juliet'! The Thea Sisters all want the part of Juliet, but so does their rival Ruby Flashyfur. Who will be the star of the show? 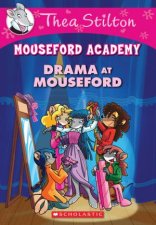 Drama At Mouseford
Thea Stilton & Geronimo Stilton
RRP $12.99
$12.99
RRP refers to the Recommended Retail Price as set out by the original publisher at time of release.
The RRP set by overseas publishers may vary to those set by local publishers due to exchange rates and shipping costs.
Due to our competitive pricing, we may have not sold all products at their original RRP.