Lamb has served as a volunteer facilitator for a writing workshop at the York Correctional Institute, a maximum-security prison for women, in Niantic, Connecticut since 1999. Institute, a maximum-security prison for women. He has edited two collections of autobiographical essays entitled Couldn't Keep It to Myself: Testimonies from Our Imprisoned Sisters (2003) and I'll Fly Away (2007).

Lamb currently lives in Mansfield, Connecticut with his wife and their three sons. 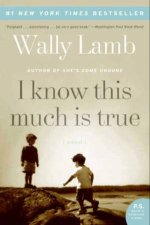 I Know This Much Is True
by Wally Lamb
24.99
24.99
_% Off
RRP refers to the Recommended Retail Price as set out by the original publisher at time of release.
The RRP set by overseas publishers may vary to those set by local publishers due to exchange rates and shipping costs.
Due to our competitive pricing, we may have not sold all products at their original RRP.