Alex Flinn is an American author of novels for young adults. To date, she has written seven books that have been published.

Flinn was born in Glen Cove, New York and grew up in Syosset, New York and Miami, Florida. At the age of five she started thinking about being a writer and submitted early efforts to magazines like Highlights, which did not publish them. At twelve, she moved to Palmetto Bay, Florida, a suburb of Miami, where she still lives. She had a hard time making friends at her new school, and she has said that this experience inspired much of her writing for young adults, particularly her book, Breaking Point.

She graduated from Miami-Palmetto High School and was in a magnet performing arts program called PAVAC (Performing And Visual Arts Center), which inspired some of her book, Diva. She graduated from the University of Miami with a degree in vocal performance (opera) then went to law school and practiced law for 10 years before retiring to devote herself full-time to writing, following the acceptance of her third book. She is married to Eugene Flinn and has two daughters. 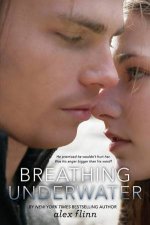 Breathing Underwater
by Alex Flinn
19.99
19.99
_% Off
RRP refers to the Recommended Retail Price as set out by the original publisher at time of release.
The RRP set by overseas publishers may vary to those set by local publishers due to exchange rates and shipping costs.
Due to our competitive pricing, we may have not sold all products at their original RRP.