Candida Baker was born in London in 1955 and emigrated to Sydney in 1977. Her first novel, Women and Horses, was published to critical acclaim in Australia in 1990, and a year later in the United States. The Powerful Owl, a collection of short stories, several of which had won prizes prior to publication, was published in 1994. Baker is also the creator of the Yacker series of interviews with Australian writers, and has written several children's books. Her short stories and essays have been published in numerous anthologies. As a journalist, she has worked for the Age, Time magazine and the Sydney Morning Herald. She is currently editor of the Saturday Australian Magazine. 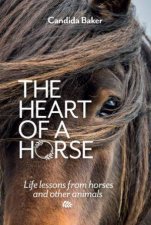 The Heart Of A Horse
by Candida Baker
29.99
29.99
_% Off
RRP refers to the Recommended Retail Price as set out by the original publisher at time of release.
The RRP set by overseas publishers may vary to those set by local publishers due to exchange rates and shipping costs.
Due to our competitive pricing, we may have not sold all products at their original RRP.