Carrie Jones likes Skinny Cow fudgsicles and potatoes. She does not know how to spell fudgsicles. This has not prevented her from writing books. She lives in Bar Harbor, Maine, but she grew up in Bedford, NH where she once had a s ance with cool uber-comedian Sarah Silverman. Her house was terribly haunted. Pencils would randomly catch fire. Never a good thing.

The Meyers brothers are from Bedford, too, so you'd think it would make Carrie funnier, coming from Bedford N.H. Obviously, something didn't work.

Carrie has two overly friendly dogs and two fat cats. All like fudgicles. Only the cats like potatoes. This may be a reason for the kitties weight problems (Shh don't tell). Carrie has always liked cowboy hats but has never owned one. This is a very wrong thing. She graduated from Vermont College's MFA program for writing. And was awarded the distinguished alum award. 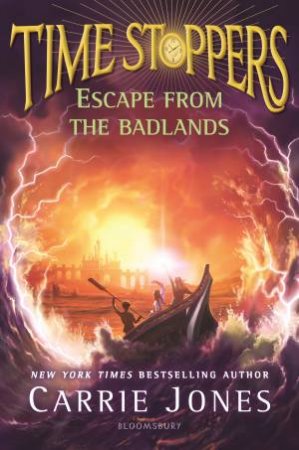 Hardcover
Escape From The Badlands
Carrie Jones
$22.99
RRP refers to the Recommended Retail Price as set out by the original publisher at time of release.
The RRP set by overseas publishers may vary to those set by local publishers due to exchange rates and shipping costs.
Due to our competitive pricing, we may have not sold all products at their original RRP.