Cecilia Dart-Thornton was born and raised in Melbourne, Australia, graduating from Monash University with a Bachelor of Arts degree in sociology. She became a schoolteacher before working as an editor, bookseller, illustrator and book designer. She started and ran her own business, but became a full-time writer in 2000 after her work was discovered' on the Internet and published by Time Warner (New York). A keen supporter of animal rights and wilderness conservation, she has also branched out into such diverse industries as clay sculpting, performing in folk music bands, and digital media. Her books are published around the world and have been translated into several languages. 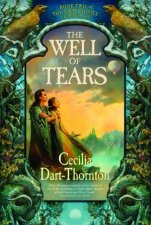 The Well Of Tears
by Cecilia Dart-Thornton
16.99
16.99
_% Off
RRP refers to the Recommended Retail Price as set out by the original publisher at time of release.
The RRP set by overseas publishers may vary to those set by local publishers due to exchange rates and shipping costs.
Due to our competitive pricing, we may have not sold all products at their original RRP.