Charles de Lint is widely credited with having pioneered the contemporary fantasy genre. With 35 novels and 18 books of short fiction published to date, he is known as a master in his field.

His most recent adult novel, The Mystery of Grace, is a love story, a ghost story, a supernatural mystery and, above all, a heart-wrenching tale of passion and faith. It has been nominated for two major Canadian book awards (the Sunburst and the Evergreen).

While most of de Lint's fiction has been written for adults, he's also penned several books for young people. . Two books for middle-grade readers (as yet unscheduled) will be published by Little, Brown and Company. 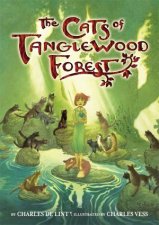 The Cats of Tanglewood Forest
by Charles de Lint
13.99
13.99
_% Off
RRP refers to the Recommended Retail Price as set out by the original publisher at time of release.
The RRP set by overseas publishers may vary to those set by local publishers due to exchange rates and shipping costs.
Due to our competitive pricing, we may have not sold all products at their original RRP.