Curtis is an Australian chef and has hosted several TV shows including Take Home Chef and Surfing The Menu. He was trained in the UK under the tutelage of Marco Pierre White. He worked his way up until Marco made him Head Chef of the acclaimed Quo Vadis in Soho. During this four year stint he was approached by a publisher to be included in a book about London's finest, titled 'London On A Plate'. This led to an agent and further media opportunities.

After appearing in a number of British TV shows, in 2003 he started on Surfing The Menu (with Ben O'Donahue) for ABC Australia, along with a tie-in book of the same name.

It was Take Home Chef in 2007 that propelled him to fame in the US. This success led People magazine to vote him as one of the sexiest men alive. 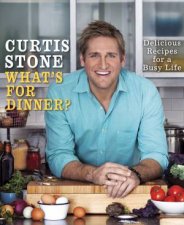 What's for Dinner? Delicious Recipes for a Busy Life
by Curtis Stone
39.99
39.99
_% Off
RRP refers to the Recommended Retail Price as set out by the original publisher at time of release.
The RRP set by overseas publishers may vary to those set by local publishers due to exchange rates and shipping costs.
Due to our competitive pricing, we may have not sold all products at their original RRP.