Geoffrey Dutton was born in 1922 at Anlaby, the oldest stud sheep station in South Australia. He was educated at Geelong Grammar, Adelaide University and Magdalen College, Oxford, where he read English under C S Lewis. War service as a pilot with the RAAF gave him a different kind of education, no less valuable. Senior Lecturer in English at Adelaide University from 1953 to 1962, he was Visiting Fellow at the University of Leeds and Professor at Kansas State University.

Dutton had over fifty books to his credit - poetry, biography, art and literary criticism, fiction and children's writing. He was awarded an Order of Australia and was the founding memeber at its launch. 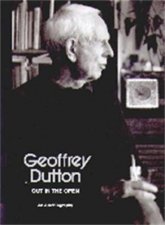 Out in the Open
by Geoffrey Dutton
30.00
30.00
_% Off
RRP refers to the Recommended Retail Price as set out by the original publisher at time of release.
The RRP set by overseas publishers may vary to those set by local publishers due to exchange rates and shipping costs.
Due to our competitive pricing, we may have not sold all products at their original RRP.