Jo-Ann Mapson is the author of eight books of mainstream fiction as well as many freelance articles, national book reviews, and has been included in several anthologies . Blue Rodeo was made into a CBS television movie starring Kris Kristofferson and Ann-Margret. Hank & Chloe, The Wilder Sisters, and Bad Girl Creek, were national bestsellers. Bad Girl Creek was a 2002 Booksense 76 pick, as well as an alternate selection for Doubleday, Literary Guild, and Book of the Month Clubs. It was also released in large print and unabridged audio for Chivers. Currently at work on a new novel, Mapson authors a monthly column on the writing life for Art Matters and teaches fiction in the MFA Program in Writing at UAA. Her former students include: mystery writer Earlene Fowler (the Benni Harper series), and mainstream writers Judi Hendricks 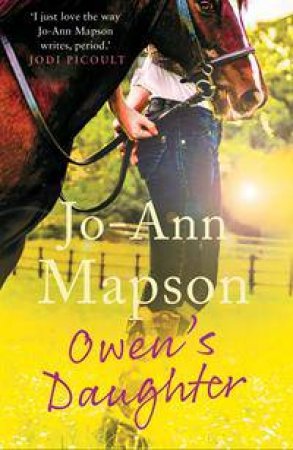 Owen's Daughter
Jo-Ann Mapson
$19.99
RRP refers to the Recommended Retail Price as set out by the original publisher at time of release.
The RRP set by overseas publishers may vary to those set by local publishers due to exchange rates and shipping costs.
Due to our competitive pricing, we may have not sold all products at their original RRP.