Joel Shepherd (born 1974 in Adelaide, South Australia) is an Australian science fiction author. He moved to Perth, Western Australia with his family when he was seven, where he later studied film and television arts at Curtin University. He now lives in Adelaide.

He is the son of Kate Shepherd, owner/operator of Austral Ed, a small Australian educational book supplier to Asia. He helps his mother in this business and has travelled widely as a result.His first unpublished manuscript was shortlisted for the George Turner Prize in 1998 and the manuscript for Crossover was shortlisted in 1999.

His first novel Crossover was shortlisted for the science fiction division of the 2001 Aurealis Awards, that recognise the achievements of Australian science fiction, fantasy and horror writers. His first three novels follow the adventures of Cassandra Kresnov, (who describes herself as an artificial human being), who has deserted from her Special Operations unit in the League and fled to the city of Tanusha on the Federation planet of Callay, posing as a journeyman cognitive software expert. 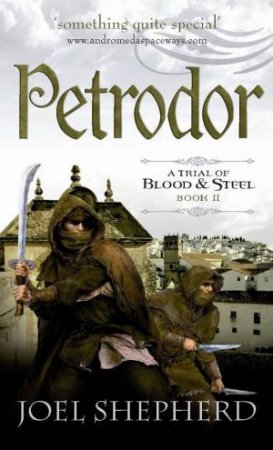 Petrodor
Joel Shepherd
$19.99
RRP refers to the Recommended Retail Price as set out by the original publisher at time of release.
The RRP set by overseas publishers may vary to those set by local publishers due to exchange rates and shipping costs.
Due to our competitive pricing, we may have not sold all products at their original RRP.