Kevin Gilbert was born in the small country town of Condobolin in New South Wales. Directly descended from Aboriginal, Irish, English stock, he lived in Aboriginal reserves and fringe settlements until 1957 when he was sentenced to penal servitude for life on a charge of murder. He served fourteen and a half years under the NSW prison system.

In spite of those tough years he became the first Aboriginal playwright. His play about Aboriginal seasonal workers is called 'The Cherry Pickers'. He was a poet, a great talker, an oils artist, and wrote 'Because A White Man'll Never Do It', the first major political work by an Aboriginal person, and 'Living Black', an Aboriginal oral history. He died in 1993. 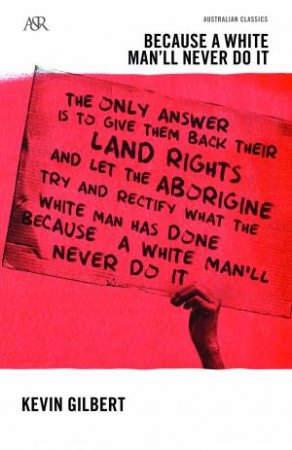 Because a White Man'll Never Do It
Kevin Gilbert
$16.99
RRP refers to the Recommended Retail Price as set out by the original publisher at time of release.
The RRP set by overseas publishers may vary to those set by local publishers due to exchange rates and shipping costs.
Due to our competitive pricing, we may have not sold all products at their original RRP.