A bestselling author and luminary authority on Kabbalah, Yehuda Berg is part of a long line of kabbalistic masters, and the son of Rav and Karen Berg.

Recognised as the world's leading authority on the Kabbalah movement by Newsweek, the magazine named him as one of the top five rabbis in the United States in 2007. In 2009, GQ magazine's The Gentlemen's Fund honoured him for being an Agent of Change in the field of Education.

A progressive voice on spirituality, Yehuda is a prolific author of more than 30 books on topics ranging from self-empowerment, depression, sex, and the Bible. His bestsellers are The Power or Kabbalah and The 72 Names of God, which have been translated into 20 and 14 languages respectively. His daily Tune-ups are sent to more than 200,000 fans, and he contributes regularly to Huffington Post. 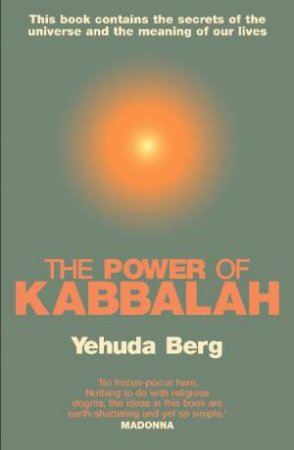 Power Of Kabbalah
Yehuda Berg
$24.99
RRP refers to the Recommended Retail Price as set out by the original publisher at time of release.
The RRP set by overseas publishers may vary to those set by local publishers due to exchange rates and shipping costs.
Due to our competitive pricing, we may have not sold all products at their original RRP.