Adeline Yen Mah was born in Tianjin, China. She lived in Shanghai as a child and moved to Hong Kong at age eleven. At fourteen, she won a writing competition, which convinced her father to send her to study in England. She attended London Hospital Medical School, graduated as a physician and established a thriving medical practice in California. She worked as an anesthesiologist at West Anaheim Community Hospital and became chief of anesthesia.

Her first book Falling Leaves was published in 1997. It made the New York Times Bestseller list and sold over a million copies worldwide, being translated into twenty two languages. After the publication of Falling Leaves, Adeline gave up medicine to write full-time. Chinese Cinderella is her autobiography written for children and also sold over one million copies worldwide. It received an award from the Children's Literature Council of Southern California in 2000 for Compelling Autobiography and Lamplighter's Award from National Christian School Association in June 2002 for Contribution to Exceptional Children's Literature. Her third book Watching the Tree is a book of Chinese philosophy, published in 2001. Her fourth book, A Thousand Pieces of Gold, was published in October 2002.

Adeline has written three other children's books: Chinese Cinderella and the Secret Dragon Society and Along the River are novels based on Chinese history. China: Land of Dragons and Emperors is a Chinese history book written for teen-agers.

Chinese Cinderella: The Secret Story Of An Unwanted Daughter
by Adeline Yen Mah
19.99
19.99
_% Off 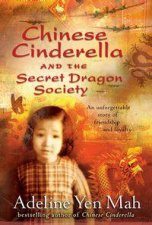 Chinese Cinderella: The Mystery of the Song Dynasty Painting
by Adeline Yen Mah
15.99
15.99
_% Off
RRP refers to the Recommended Retail Price as set out by the original publisher at time of release.
The RRP set by overseas publishers may vary to those set by local publishers due to exchange rates and shipping costs.
Due to our competitive pricing, we may have not sold all products at their original RRP.