Andy McDermott is a British thriller author, and former journalist, magazine editor and film critic. To date, McDermott's books have all featured the same two lead characters: Dr Nina Wilde, a young American archaeologist, and Eddie Chase, a former British SAS soldier initially hired as her bodyguard, who later develops a personal relationship with her. 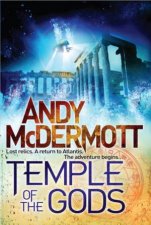 The Secret Of Excalibur
by Andy McDermott
27.99
27.99
_% Off
RRP refers to the Recommended Retail Price as set out by the original publisher at time of release.
The RRP set by overseas publishers may vary to those set by local publishers due to exchange rates and shipping costs.
Due to our competitive pricing, we may have not sold all products at their original RRP.