Anne Deveson is a writer, broadcaster and documentary filmmaker with a long involvement in human rights issues. She was born in Kuala Lumpur; spent her childhood moving between Malaysia, Britain and Australia, then worked as a journalist for the BBC and the London bureau of the New York Times. In Australia, she became the first woman to run her own daily current affairs radio program. In 1974, she was appointed a Royal Commissioner with the Royal Commission on Human Relationships and in 1978, a founding member of the NSW Anti-Discrimination Board.

Deveson was Chair of the South Australian Film Corporation and Executive Director of the Australian Film, Television and Radio School. She has made numerous award winning television and radio documentaries including several films in Africa and Asia which have won her three UN Media Peace Awards. In 1993 she was made an Officer of the Order of Australia for services to the media and to mental health. She also holds several honorary doctorates. Her writing includes the internationally acclaimed 'Tell Me I'm Here', which won the 1991 Human Rights Award for non-fiction. She has also written 'Australian At Risk', 'Faces Of Change' and 'Coming Of Age'. Her first novel, 'Lines In The Sand', draws from Deveson's own experiences and is a passionate story of loyalty, courage and the human spirit. 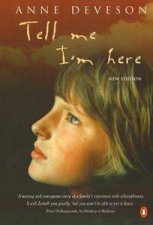 Tell Me I'm Here
by Anne Deveson
24.99
24.99
_% Off
RRP refers to the Recommended Retail Price as set out by the original publisher at time of release.
The RRP set by overseas publishers may vary to those set by local publishers due to exchange rates and shipping costs.
Due to our competitive pricing, we may have not sold all products at their original RRP.