Asa Larsson (born 28 June 1966 in Uppsala) is a Swedish crime-writer. Although born in Uppsala, she was raised in Kiruna in the far north. Prior to becoming a full-time writer, Larsson was a tax lawyer, a profession she shares with the heroine of her novels, Rebecka Martinsson. Her first novel published in the UK (under the title The Savage Altar), was shortlisted for the Duncan Lawrie International Dagger. Her second novel, Det blod som spillts, won the Best Swedish Crime Novel Award.

The 2007 Swedish film Solstorm was based on the book The Savage Altar. She has currently published 6 titles. 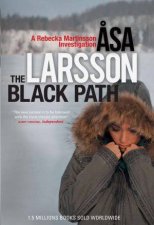 The Black Path
by Asa Larsson
29.99
29.99
_% Off
RRP refers to the Recommended Retail Price as set out by the original publisher at time of release.
The RRP set by overseas publishers may vary to those set by local publishers due to exchange rates and shipping costs.
Due to our competitive pricing, we may have not sold all products at their original RRP.