Ayaan Hirsi Ali is a Dutch feminist activist, writer, and politician. She is the daughter of the Somali scholar, politician, and revolutionary opposition leader Hirsi Magan Isse. She is a prominent critic of Islam, and her screenplay for Theo Van Gogh's movie Submission led to death threats.
Her family moved around Africa when she a child, including stops in Kenya and Ethiopia. She was granted political asylum in The Netherlands in 1992, and was elected to the lower house of the Dutch parliament in 2003. Threatened with having her citizenship revoked, she resigned, and moved to the US where she resides today. She was listed in Time magazine's 100 Most Influential People In The World in 2005. She has won several awards for her commitments to feminism, free speech and overcoming oppression. She released her memoir, Infidel, in 2006. It was followed by an English translation in 2007. 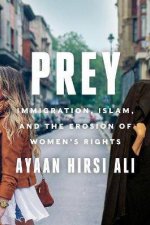 Nomad: A Personal Journey Through The Clash Of Civilizations
by Ayaan Hirsi Ali
24.99
9.99
60% Off

Caged Virgin: A Muslim Woman's Cry For Reason
by Ayaan Hirsi Ali
22.99
22.99
_% Off
RRP refers to the Recommended Retail Price as set out by the original publisher at time of release.
The RRP set by overseas publishers may vary to those set by local publishers due to exchange rates and shipping costs.
Due to our competitive pricing, we may have not sold all products at their original RRP.