Ayn Rand, born Alisa Zinov'yevna Rosenbaum, was a Russian-born American novelist, philosopher, playwright and screenwriter. She is widely known for her best-selling novels The Fountainhead and Atlas Shrugged, and for developing a philosophical system called Objectivism. Rand advocated rational individualism and laissez-faire capitalism, categorically rejecting socialism, altruism, and religion. Her ideas remain both influential and controversial. 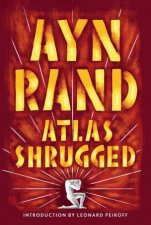 Penguin Modern Classics: The Fountainhead
by Ayn Rand
22.99
22.99
_% Off
RRP refers to the Recommended Retail Price as set out by the original publisher at time of release.
The RRP set by overseas publishers may vary to those set by local publishers due to exchange rates and shipping costs.
Due to our competitive pricing, we may have not sold all products at their original RRP.