Barbara Taylor Bradford was born in Leeds, Yorkshire, and was a reporter for the Yorkshire Evening Post at 16. By the age of 20 she had graduated to London's Fleet Street as both an editor and columnist.

In 1979, she wrote her first novel, A Woman of Substance, and her subsequent bestsellers include Voice of the Heart, Hold the Dream, Act of Will, To Be the Best, The Women in His Life and her latest triumph Where You Belong.

Of these titles, 10 have been made into television miniseries or are currently in production. Her novels have sold more than 56 million copies worldwide in more than 88 countries and 38 languages. Barbara Taylor Bradford lives in New York City and Connecticut with her husband, film producer Robert Bradford. 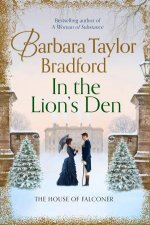 Secrets Of Cavendon
by Barbara Taylor Bradford
19.99
19.99
_% Off
RRP refers to the Recommended Retail Price as set out by the original publisher at time of release.
The RRP set by overseas publishers may vary to those set by local publishers due to exchange rates and shipping costs.
Due to our competitive pricing, we may have not sold all products at their original RRP.