Barry Humphries' perennial success and his popularity with an increasingly heterogeneous international public have delighted all but a handful of curmudgeonly Australian journalists who are destined, alas, ever to remain strangers to Fame. His comic theatrical inventions have become accepted as national archetypes and Dame Edna Everage is the preferred role model for most of Australia's female achievers; albeit that the vetripotent, fescennine and priapic Ambassador, Sir Les Patterson, not seldom elicits from his countrymen an incredulous howl like that of Caliban on beholding his own reflection. Mr Humphries is an accomplished landscape painter, bibliophile and sometime music-hall artist. His books, translated into most European languages, are hugely popular, his stage shows enthusiastically patronized and his charming society much sought after by hostesses. Withal, he remains a pleasant and approachable person and a patriotic Australian. His autobiography More Please was published by Penguin in 1992. Barry was born in Camberwell, Melbourne, however now lives in London. 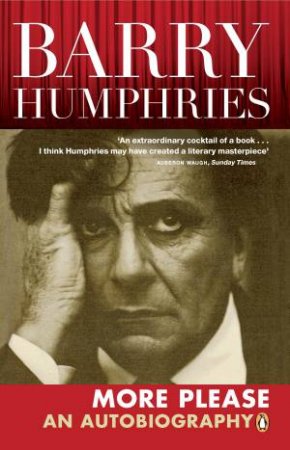 Barry Humphries: More Please: An Autobiography
Barry Humphries
$26.99
RRP refers to the Recommended Retail Price as set out by the original publisher at time of release.
The RRP set by overseas publishers may vary to those set by local publishers due to exchange rates and shipping costs.
Due to our competitive pricing, we may have not sold all products at their original RRP.