Cecelia Ahern (b. September 30, 1981 in Dublin, in Ireland) is an Irish novelist. In addition to publishing several novels, she has also contributed a number of short stories to various anthologies, for which all her royalties go to charity, and she is currently a producer for the ABC comedy Samantha Who? starring Christina Applegate. 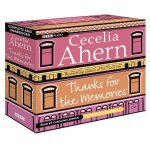 Thanks for the Memories Unabridged 10CD
by Cecelia Ahern
44.99
44.99
_% Off
RRP refers to the Recommended Retail Price as set out by the original publisher at time of release.
The RRP set by overseas publishers may vary to those set by local publishers due to exchange rates and shipping costs.
Due to our competitive pricing, we may have not sold all products at their original RRP.