Chris Milne was born in 1950. He is an Australian actor and award winning writer who has scripted numerous episodes of Prisoner and Neighbours, as well as appearing on the shows as a performer. He also played the character of Philip Martin on the Australian soap opera Neighbours in 1985 and Ben Mazzini in Water Under The Bridge. Milne also acted in such films as the vampire film Thirst and Felicity.

He has written children's books (ages 6 13) for many years and his Naughty Stories for Good Boys and Girls is a winner of The Young Australians Best Book Award. He recorded 13 of the stories for the BBC in London. 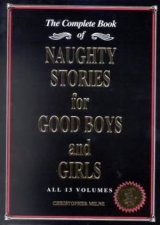 Complete Book Of Naughty Stories For Good Boys And Girls
by Christopher Milne
19.95
19.95
_% Off
RRP refers to the Recommended Retail Price as set out by the original publisher at time of release.
The RRP set by overseas publishers may vary to those set by local publishers due to exchange rates and shipping costs.
Due to our competitive pricing, we may have not sold all products at their original RRP.